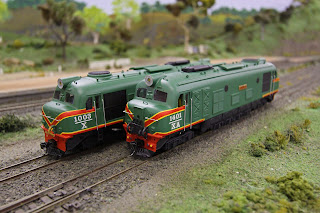 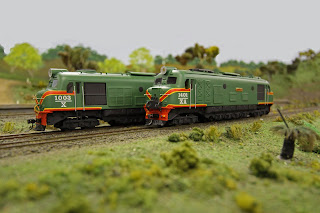 In March 1954 the WAGR purchased 48 locomotives from the Metropolitean Vickers Electrical Company limited of Manchester, England. They were delivered over the next three years and apart from early mechanical trouble which was eventually resolved they performed tirelessly and were seen all over the network from the far north to the deep south.. The X class were built with an axle load of 10.4 tons and were built with the unusual double cab, a feature back then was uncommon, but ahead of its time in principle. They had four driving axles mounted within a rigid wheelbase flanked at either end by a four wheel trailing truck. 2 Do 2 and were the only Australian locomotive to have this wheel type arrangement. Three versions of the class existed, an X, XA and XB. XA and Xb locomotives are capable of MU operation with the XA locomotive having end communication doors. The class were named after local aboriginal tribes, with brass nameplates affixed in the middle of both sides of the locomotive.


The X and XA models are a vacuum formed kit produced by X class Models. The kit is a body only kit, and is assembled using a Bachmann DD 40 chassis. I have included extra roof detail including fan cover and engine lift rings, as well as the MU plugs on the XA. The models took about a month to complete and goes together very well. The model is painted using Humbrol Green 76, and Yellow 154 and Red 174 and a mix of Matt Black and H 67 for the underframe. The models are fitted with a TSC decoder and will be fitted with a Tsunami Fairbanks Morse sound chip.
Posted by Just WA Train Models at 10:03 AM No comments:

In November 1935 WAGR buffet car AGB17 was converted to a shower car for use on the RESO (Resource) Trains being operated throughout the state. This unique "one off" coach replaced "Bath Car" AG45, lasting in service until being written off in Oct 1976.

During September/October 2010 I commenced scratchbuilding this coach for use with my set of ARS, AQZ sleeping cars to enable operation of a RESO set if so desired.


After some persuading the scratchbuilt sides became patterns and the coach was eventually produced as polyurethane kit. The period modelled is from 1964 to 1976 - due to the coach being refurbished in 1964 with plywood panelled sides

The kit is now available from WESTOZ Models, although stocks are limited.
Essentially it is a "Body" kit only, with some detailing parts (specific to this coach) included.
The modeller will need a basic grounding in assembling of urethane kits and a reasonable level of modelling skills to complete the model.
Posted by WestOzModels at 8:46 AM No comments:


As a first time post, I have been requested by Westland Models to put up pics of my scratchbuilt model of V1213.
The V class were the last of the steam locomotives built for the WAGR in 1955 - weighing in at 135t, these heavy freight locos were capable of some of the biggest loads hauled during WA's steam period. Well proportioned and brutish in appearance they are considered to be one of WA's finest locomotives.

For a bit of a background - V1213 holds a special place in my heart as I had the opportunity to operate the preserved locomotive for about 8 years whilst volunteering and later working for the Pemberton Tramway Co. tourist railway in the Sth West region of W.A.

I never could have imagined when I first climbed into the rusting cab of 1213, when it stood forlorn in the HVTR yard at Pinjarra, or chasing it lineside during its first restored "freight" trial run, that I would eventually be driving and caring for it several years later. 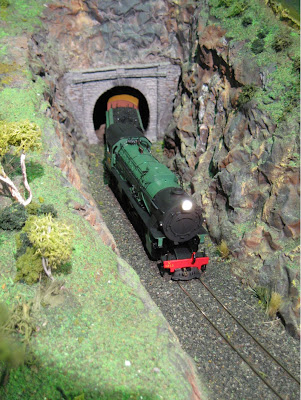 As a modeller of the WAGR in S scale, there was naturally going to have to be, a model of V1213 built, but only when my skills could produce a model, to a level I would find acceptable to myself. I'm probably 98% happy with the end result!
It is built on a recent release Bachmann "Berkshire" mechanism which has correct wheel size and spacing for the main drivers. The rest of the model is scratchbuilt from styrene sheet material, an oscillating fan "stand" for the boiler barrel and utilising Railwest Models detailing parts where available. The Walschaert valve gear was generously scratchbuilt for me by Lynton E. for which I am very grateful. I have superdetailed the model to the best of my ability and suggest if you see the real thing on a layout - "look very closely".
The model was completed in May 2009 and has now done a few miles on the S scale group layouts over 2 exhibitions. This has recently led to a group of our S scale modellers embarking on producing a Kit.
Posted by WestOzModels at 8:07 PM 3 comments: 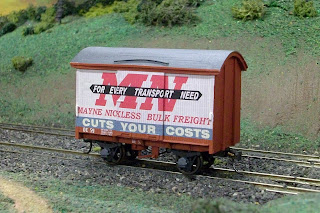 Recently completed is a model of DE 59, a small 4 wheel goods van which operated on the Western Australian Government Railways. 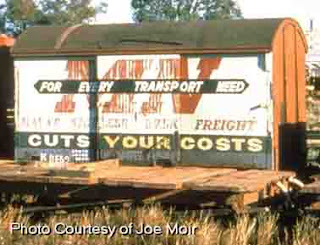 More details on its history is avaliable from Andy Mays Wagon Page at: http://homepage.ntlworld.com/asmay2002/d_15_wagon.htm 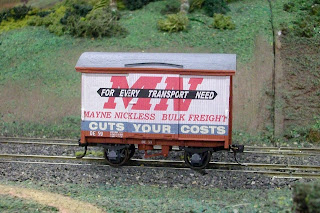 Posted by Westland Models at 3:59 PM No comments:

Listed below are the links to the video's of the of Boyanup and Swan View layouts.


Enjoy
Posted by Westland Models at 3:58 PM No comments: 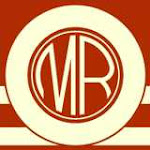